Most are Native to the Pacific Northwest 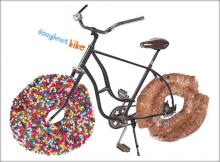 Can someone really consider themselves all that much of a health food nut if their idea of a healthy day is snorting a line of coke, taking a ten and a half minute bike ride to the convenience store down the street, and then getting all flustered, frustrated, and flummoxed because there aren’t any vegan donuts left?

But it doesn’t stop the “great exercisers” and coke-snorting vegans in the Pacific Northwest from waxing all philosophical about the benefits of riding a bicycle versus driving a car (even though the convenience store is usually within walking distance), nor does it stop them from droning on and on about how great it is to be a Vegan. (To their credit, they aren’t quite as vocal about the coke part.)

People in the middle of the country might not believe that this type of person actually exists, but it’s exactly what a certain sub-section of the population is like in the Pacific Northwest. The coke-snorting, bicycle-riding, vegan-donut-eaters wouldn’t be such a problem if they didn’t have the self-righteousness that comes with being a Vegan and riding a bicycle and the mouthiness that comes with snorting a line or two of coke.

Which is why the rest of the population gets accused of not being healthy enough.

Which is kind of mind-bogglingly ironic because the last I heard, vegan donuts are just as fattening as non-vegan donuts; a ten and a half minute bike ride does not make you all that healthy; and the Surgeon General doesn’t necessarily consider coke the healthiest recreational drug around.

Of course, I’ve never said anything to any of them. For one thing, you have no idea how angry and defensive Vegans can get when they are denied access to their vegan-donuts by a pimply clerk who tells them that the Vegan before them either ate or slobbered on all of their donuts. Suffice it to say, it’s not a pretty sight and one I am loathe to describe in great detail so you’ll have to use your imagination.

And, of course, the lines of coke snorted before any of the great vegan-donut runs is not as helpful for the vegan bicyclists as they seem to believe despite all evidence to the contrary.

All of which serves to explain why I tend to avoid coke-snorting vegan bicyclists when I meet them in convenience stores or in the street.