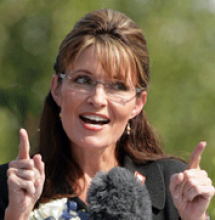 Recently, Sarah Palin was asked - to show with her fingers - how much blame and responsibility she bears for the recent Tucson, Arizona shooting tragedy. The question was sparked by Palins inability to verbally admit her part in the assassination attempt of Congresswoman Gabrielle Giffords, carried out by Jared Lee Loughner.

Her response? The menopausal politician held her fingers approximately one and a half feet away from each other, which some analysts indicate means she feels she had just enough responsibility to get an overwhelming sense of accomplishment, but not enough to ever be convicted of a crime.

The news outlets have been flooded with reports that Palin also used one of those same fingers to pleasure herself while she continued to answer questions from the crowd regarding her relationship with Loughner.

It has also been reported that the former Alaska governor pointed out her tweet, "Don't retreat, RELOAD!" is now one of the most popular phrases amongst the thousands of male "Republican only" prostitutes that "Sashay! Shante! - and blow everyone they meet" on the streets of Washington, DC.


Get Off Your High Horse, Part 2