Don't take a motorized cart if you don't need it 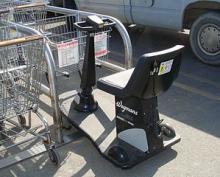 We've all seen them - the motorized shopping carts that are available at store entrances as a courtesy to shoppers who need them.

The key words here are shoppers who need them.

It's a great service, and I'm glad that these carts are available, should the day come when I need to use one. Last year, my dad broke his leg, and was glad to have this service available when he went grocery shopping. And I'm quite sure that those who get short of breath, or have leg injuries, or any other the other legitimate reasons for using a motorized cart appreciate the service as well.

However, too many times I've seen people take these carts who clearly don't need them.  Like the teenager who, just minutes before entering the store and procuring a scooter, was running through the parking lot. Or the slightly overweight woman who was using the scooter as a battering  ram to get through the aisles of a crowded store. This particular woman would practically run people over to get past them, then park the cart at the end of the aisle, get off, walk the entire aisle up and back to get what she wanted, and then get back on the cart, moving to the next area and repeating the process.

It just really irks me. Just because someone is lazy, it's not an excuse, or a pass, to use a cart. I mean, what if you took a motorized cart, even though you didn't need it, just because it was there and someone came in who actually needed it? Would you feel guilty? If you're the type of person who would do this in the first place, probably not.

Unfortunately, the store, door greeters, and other employees really can't say anything to the offenders, because there might be the slightest possibility that the running teenager might actually need the cart. Then that would open a big can of worms that the store doesn't need.


Why I Avoid Coke-Snorting, Vegan-Donut-Eating Bicyclists