The only time you’ll ever need to know something is on his show! 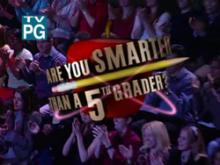 Jeff Foxworthy himself is not proof that we don’t need schools, but the television show that he hosts, Are You Smarter Than a Fifth Grader?, sure is. Have you watched this thing? It’s painful. An adult is asked a bunch of questions that the average fifth grade student would know, and he or she has a team of fifth graders to rely on for help. The few times I’ve seen the show, the adult is typically wrong and the kids are right—and if the adult fails to rely on the kids, he or she loses, and it’s a giant, embarrassing joke.

On the one hand, I’m constantly slapping my face. I was one of those teacher pleaser students who had to memorize everything in order to avoid getting into trouble and disappointing anyone other than myself, which left me with some pretty flawed views of the world and myself—but also left me with plenty of useless knowledge. I usually know the answers on the show and feel like calling the adults on it idiot, moron, imbecile…

Yet that phrase—useless knowledge—is key here. It’s truly useless. Knowing it has not made me a better person or gotten me a better job. And most of the people on the show look pretty happy and healthy. None of them have been homeless, to my knowledge (though that in and of itself isn’t an indication of success, either, but often one of sheer bad luck—or even voluntary poverty, depending on the person). They have all had jobs, families. They’re pretty successful, despite the fact that they don’t know what the hell a palindrome is. (It’s a word that’s spelled the same forwards as it is backwards for those of you who’ve forgotten; again, pretty useless to know, except for within a television show.)

These kids are being told that they’re memorizing these facts for a better life, that they’ll get better jobs and earn money and who knows what else, just by knowing them and doing well in school. Not only do we know this to be erroneous now in such a tanked economy; I think it’s been erroneous all along. It really depends on how you define success.

If success means doing what you love, living life to your own standards with your own ethics, living a sustainable lifestyle, having a family, or anything that’s personal to you—well, it’s pretty irrelevant. If success means memorizing a bunch of facts so you can keep memorizing more facts to eventually be a public school teacher or college professor, then, yes, perhaps it’s helpful. But how many of us are on that track—or want to be, for that matter?